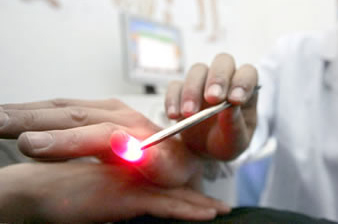 This is the Position Statement on Laser Acupuncture from the IAMA which is a nice introduction to the use of Low Level Laser Therapy (LLLT) or cold laser in place of needles or pressure to stimulate the TCM meridians and points for healing.

LASER, an acronym for Light Amplification by Stimulated Emission of Radiation, was developed in the early 60s. It is a form of electromagnetic radiation, in the visible or infrared region of the light spectrum, generated by stimulating a medium, which may be solid or gaseous, under special conditions. The beam of light thus generated has uses in almost every area of technology which exist today.

Laser was first used in the medical field as a focussed, high power beam with photo thermal effects in which tissue was vapourised by the intense heat. During the early phase of its use as a surgical tool, it was noted that there appeared to be less pain and inflammation following laser surgery than conventional surgery.

It was postulated that this effect was related to the use of surgical lasers with a Gaussian beam mode (see fig) In this mode the power of laser is highest at the centre of the beam with the power then falling off in a bell-shaped curve with the weakest power at the periphery of the beam diffusing out into the undamaged tissues (2). This phenomenon was called the “alpha-phenomenon” (35). Thus the “low power” segment of the beam was postulated to be responsible for the decreased pain and inflammation in the wound. Workers in the field recognised this effect. Laser devices were manufactured in which power densities and energy densities of laser were lowered to a point where no photo thermal effects occurred but the photo-osmotic, photo-ionic and photo-enzymatic effects were still operative. Thus the use of “cold” laser or “soft” laser, as it was first known, came into medical use.

The earliest experimental application of low power laser in medicine was first reported in 1968 by Endre Mester in Hungary. He described the use of Ruby and Argon lasers in the promotion of healing of chronic ulcers. In 1974, Heinrich Plogg of Fort Coulombe, Canada, presented his work on the use of “needleless acupuncture” and pain attenuation. The first clinical applications of the GaAIAs diode laser appeared in the literature in 1981.

Since then a multitude of devices, from many different countries, generating a variety of laser beams of varying power, wavelengths, frequencies and claims of clinical effects have been brought onto the market.

Its use is now widespread in almost every medical speciality, especially dermatology, ophthalmology and medical acupuncture.

Japan and several Scandinavian countries are at the forefront of clinical research work with laser. Low Level Laser Therapy (LLLT) is also used in Australia, Canada, France, Korea, People’s Republic of China, U.K. and many other countries. A tissue repair research unit, examining the effects of laser, now exists at Guy’s Hospital, London. Many centres of research are now developing around the world.

It is to be noted that lasers machines are used widely by physiotherapists, veterinary surgeons (3) as well as practitioners of alternate therapies. It is unregulated by any authority at the present time, apart from the need for the equipment to conform to Australian standard safety regulations.

The aim of this position paper is to present the current views, on the use of laser, of the Australian Medical Acupuncture College.

The photo-chemical effects of light in medicine are well known e.g. blue light is absorbed by bilirubin and thus undergoes photo-chemical change. THis is the basis of the treatment of neonatal jaundice. Another use is that of ultraviolet light to treat psoriasis in PUVA treatment. The use of a laser as a mechanism to induce photo-chemical changes in tissues is an extension of this effect.

Laser has three characteristics which make it different from ordinary light. It is monochromatic, parallel and coherent. It is the last characteristic which is the most significant factor in skin penetration, thus allowing a photo-chemical effect to occur in deeper tissues. Absorption spectra (1) can be plotted for any chemical or biological system. In any clinical setting the absorption of laser and hence its biological effect depend upon skin pigmentation, amount of fat, water and vascular congestion of tissues.

Penetration of laser into tissues falls off at an exponential fashion. Thus increase of laser power applied to tissues does not result in a linear increase in biological effect.

2. Photoactivation of enzymes: one photon can activate one enzyme molecule which in turn can process thousands of substrate molecules (1). This mechanism provides a theoretical framework in which a very small amount of energy can cause a very significant biological effects.

Primary photoacceptors, which are activated by laser, are thought to be flavins, cytochromes
(pigments in the respiratory chain of cells) and porphyrins (14,15). They are located in mitochondria. They can convert laser energy to electro-chemical energy.

It is postulated that the following reaction is activated by laser (1):

3. Vibrational and rotational changes in cell membrane molecules: Infra-red radiation results in rotation and vibration of molecules in the cell membrane leading to activation of the Ca++ pump as in the cascade above.

It is essential that basic parameters of laser physics are understood by the practitioner in order to achieve the best results in any given clinical setting.

Wavelength The wavelength of a laser is determined by the medium from which it is generated. Wavelengths of low power lasers in common clinical use in Australia today are 632.8nm ( Helium Neon, gas) in the visible light range, 810nm (Gallium / Aluminium / Arsenide, diode) and 904 nm (Gallium / Arsenide, diode) in the infra red region of the light spectrum. Other wavelengths are used more commonly in surgical settings. The wavelength is the prime determinant of tissue penetration. Lasers which penetrate less deeply are suitable for acupuncture point stimulation and biostimulation. Infra red lasers penetrate more deeply and are used in deeper tissue stimulation such as trigger points.

Energy
Energy is a measure of the dose of laser given in any treatment
Laser energy, in joules, is calculated from the formula:

It can be seen from this formula that energy, expressed as joules, is related to the power of the laser and the duration of irradiation so that a higher power laser takes less time to generate the required number of joules than a lower power laser. The range of powers of laser devices used in Australia varies from 1.5 to 100 mW. Principles of laser dosing should be understood by users as some clinical effects, especially with higher power lasers, appear to be dose related. Acupuncture points are stimulated with energy ranging from 0.01-0.05 joules/point while trigger points may be stimulated with 1-2 joules/point or higher, depending on the tissue depth.

Energy Density
This parameter is used in the calculation of doses for biostimulation of wounds and is calculated as:

4J/cm2 is regarded as the optimal dose for biostimulation, based on empirical findings.

Power Density
This is a measure of the potential thermal effect of laser and is fixed by the characteristics of the machine for any given power output and spot size. It is calculated from the formula:

Power density (Watts/cm2) = Waifs/area of the probe tip (cm2) 1 0,OOOmW/cm2 will produce a sensation of heat

A wide range of conditions are amenable to management by Iaser, (3,4,5, 42). Many of these include conditions not amenable to or unresponsive to current drug or physical therapies such as osteoarthritis (16,18), back pain (17), post-herpetic neuralgial (9,20) , chronic pelvic inflammation (44) and rheumatoid arthritis (22,31).

Laser may be used in three different ways

Laser is used to stimulate acupuncture points using the same rules of point selection as needle acupuncture. Laser acupuncture may be used solely or in combination with needles for any given condition over a course of treatment.

In some musculo-skeletal conditions higher doses of laser may be used for the deactivation of trigger points. Trigger points may be found in muscles, ligaments, tendons and periosteum. Direct irradiation over tendons, joint margins, bursae etc may be effective in the treatment of conditions in which trigger points may play a part. Children and the elderly may require smaller doses. Areas of thick skin or muscle may require higher doses for penetration than finer skin areas e.g. ear.

The biostimulatory effects of laser have been widely investigated both in vivo and in vitro.

In vitro experimental evidence has demonstrated acceleration of collagen synthesis in fibroblast cultures due to acceleration of mRNA transcription rate of the collagen gene. Superoxide dismutase activity is increased (this decreases prostaglandins). This is postulated as one mechanism of pain and oedema reduction. Other effects are: inhibition of procollagen production in human skin keloid fibroblast cultures and stimulation of phagocytosis by macrophages, increased fibroblast proliferation, as well a wide variety of cellular responses.

In vivo effects demonstrated in animals include increased formation of granulation tissue and increased rates of epithelialisation in laser irradiated wounds, stimulation of suppressor T-cells, increased collateral nerve sprouting and regeneration of damaged nerves in rats and tendon and ligament repair in race horses.

Bio-stimulatory effects of laser are governed by the Arndt-Schultz Law of Biology i.e. weak stimuli excite physiological activity, strong stimuli retard it. The implication of this for wound healing is that, as treatment of a wound is continuing and there appears to be a slowing down of healing, a reduction of the laser dosage may be needed. By virtue of the Arndt-Schultz Law and the changed responsiveness of the tissues, what was originally a stimulating laser dose may have become an inhibitory dose of laser. The optimal energy density for biostimulation, based on current clinical experience, is 4J/cm2. Dose must be adjusted according to individual response.

Biostimulatory effects of laser may be used in the following conditions:

2. treatment of skin infections such as herpes zoster, labialis and genitalis.

Laser may have an enhancing effect on healing wherever inflammation is present.

Bio-inhibitory effects of laser may occur at higher doses e.g. 8J/cm2. Treatment of keloid scars has been successful at these doses. Class 4 Lasers are used.

Reprinted with permission of Standards Australia from Australian Standard: Laser Safety AS 2211-1991

1. Smith K. C. Light and Life: The Photobiological Basis of the Therapeutic Use of Radiation from Lasers. Progress in Laser Therapy Selected Papers from the first meetmg of the International Laser Therapy Association, Okinawa, 1990. Ed. Oshiro T and Calderhead R.G. pp 11-18.

4.Chow R. T. Results of Australia-wide survey into Laser use. The Journal of the Australian Medical Acupuncture Society: Vol IZ No 2, 1994: 28-32

5.Greenbaum, G.M. The Bulletin of the Australian Medical Acupuncture Society; Volume 6, No.2,1987.

40.Mester End re et al. The Biomedical Effects of Laser Application. Lasers in surgery and Medicine 5:31-39 1985