Vitamin B12 Deficiency and its Neurological Consequences 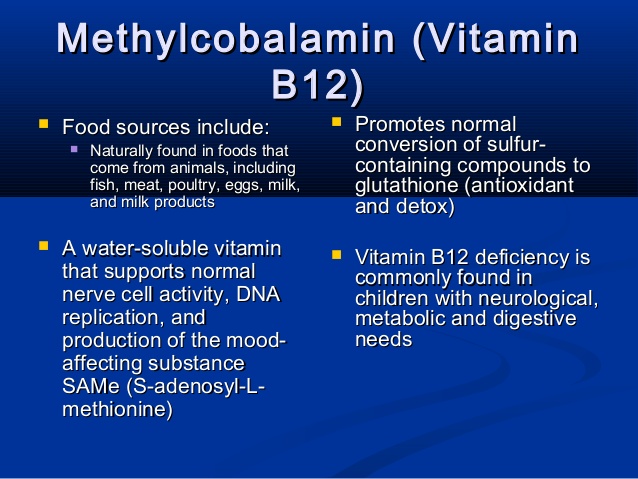 I often share with my clients information relating to nutrition, the article below is an excellent compilation of information on the importance of the B vitamins written by Viatcheslav Wlassoff, PhD. He is a scientific and medical consultant with experience in pharmaceutical and genetic research. He has an extensive publication history on various topics related to medical sciences. He worked at several leading academic institutions around the globe (Cambridge University (UK), University of New South Wales (Australia), National Institute of Genetics (Japan). Dr. Wlassoff runs consulting service specialized on preparation of scientific publications, medical and scientific writing and editing.

Research over the last 20 years on the importance of the B vitamins to mental health and brain function has shown the crucial role of these vitamins. Synthetic forms lack in bioavailabiliy, careful selection of naturally-sourced supplements and foods can provide you with these beneficial vitamins.

The article below is shared here for educational purposes and to promote research and debate, also for posterity.  The original is found at this link, please feel free to visit Dr. Wlassoff’s website for additional information, he’s an excellent researcher  http://www.brainblogger.com/2014/07/30/vitamin-b12-deficiency-and-its-neurological-consequences/

Vitamin B12 Deficiency and its Neurological Consequences
by Viatcheslav Wlassoff, PhD | July 30, 2014

B-complex vitamins are important for various functions in the human body. Whether it is energy production, body defense mechanisms, or red blood cell formation, the B-group vitamins play pivotal roles by working in tandem or individually. Vitamin B12, in particular, has a great impact on neurological health.

When it comes to neurological concerns, vitamin B1 (thiamine), B2 (riboflavin), B3 (niacin), B7 (biotin), B6 (pyridoxine), B9 (folate, synthetically known as folic acid), and B12 (cobalamin) are especially important. These B-group vitamins have specific effects on brain cell functions and their deficiency leads to different neurological and psychological problems. Vitamin B12 deficiency is not very common in young adults but older people are more prone to this condition.

Vitamin B12, or cobalamin, is an essential vitamin for the proper functioning and development of the brain and nerve cells. It plays an important role in the maintenance of the sheaths that cover and protect the nerves of the central and the peripheral nervous system, ensuring fast and effective nerve-impulse transmission.

A fatty substance called myelin is essential for the formation of these sheaths. Vitamin B12 plays a significant role in the synthesis and maintenance of myelin. The neurological problems caused by vitamin B12 deficiency later in life are due to the damage caused to the myelin sheath.

The actual mechanism by which myelin damage occurs remains unclear. However, two possible mechanisms are proposed:

1. Vitamin B12 assists an important step of the One-carbon cycle

The proper functioning of the central nervous system is dependent on One-carbon metabolism that takes place in the brain. The One-carbon cycle actually includes a series of biochemical reactions that occur in every cell of the human body. The cycle is crucial for the synthesis of DNA, RNA, neurotransmitters, membrane phospholipids, and myelin. Among these, the neurotransmitters (serotonin, dopamine, acetylcholine, and nor-epinephrine) are essential for the maintenance of the cognitive functions of the brain, and myelin is required for neuronal protection and communication as described above.

Vitamin B12 is a vital participant of the cycle because it acts as a cofactor in a very important step of the One-carbon pathway: the synthesis of methionine. The reasons for this step being so crucial are:

Methionine is an amino acid that donates the methyl groups required for methylation reactions (biochemical reactions that are essential for the synthesis of the above-mentioned substances) to occur. Without methionine, myelin and neurotransmitters that are needed for neurological development, maintenance, and functions, cannot be produced.
Methionine is synthesized from homocysteine, an amino acid that is related to many neurodegenerative diseases. A high level of this amino acid can lead to brain damage and cognitive disturbances. The synthesis of methionine thus prevents the accumulation of this harmful amino acid in the brain.
Other B-complex vitamins like folate, vitamin B6, and vitamin B2 are also essential for the One-carbon pathway.

2. Vitamin B12 acts as a coenzyme in another important reaction that is needed for myelin synthesis and stabilization

Another biochemical reaction, the conversion of methylmelonyl-CoA into succinyl CoA, also requires the coenzyme cobalamin. If this reaction does not occur, methylmalonyl-CoA gets converted to methylmalonic acid (MMA), which is a myelin destabilizer. Excess MMA leads to the synthesis of abnormal fatty acids instead of myelin. These abnormal fatty acids are incorporated into neuronal lipids leading to the formation of a fragile myelin sheath. Subsequently, abnormal myelination or demyelination occurs. The result is severe central and peripheral nervous system dysfunction.

Vitamin B12 deficiency is found to cause neurological and psychiatric problems in adults between 40–90 years of age. It rarely affects people younger than this. The neurological manifestations include myelopathy (disease of the spinal cord), neuropathy (disease of the nerves), sensory disturbances, gait abnormalities, and weakness, while the psychiatric problems range from cognitive and behavioral disturbances to dementia.

This is a progressive degenerative condition affecting the spinal cord that is caused by vitamin B12 deficiency. The degeneration may also involve the brain, the nerves of the eyes, and the peripheral nerves. Initially, the myelin sheath is damaged, followed by the degeneration of the axons (nerves). The initial symptoms of this condition are usually a tingling sensation and numbness felt on both sides, as well as clumsy movements. Other symptoms include weakness, visual problems, cognitive disturbances, abnormal reflexes, and bladder and erectile dysfunctions. Early treatment of this condition with vitamin B12 supplementation gives good results. A delay in treatment can result in an incomplete recovery of lost functions.

Peripheral neuropathy is also a usual presentation of vitamin B12 deficiency. In this condition, the transmission of nerve signals between the spinal cord and different parts of the body is disrupted. The problem may be due to direct damage caused to the nerves or demyelination that leads to axonal damage. The symptoms are tingling sensations, pain, and numbness. Depending on the type of nerve affected, there can be a loss of sensation or muscle mass and activity. This condition also needs early treatment to limit damage and obtain effective results.

The psychiatric manifestations of vitamin B12 deficiency include delusions, hallucinations, cognitive changes (like memory decline), depression, and dementia. These problems are described by various mechanisms like the deranged production of neurotransmitters and elevated levels of homocysteine and methylmalonic acid (MMA). When there is no other obvious cause of psychiatric disorder, screening for and supplementation with vitamin B12 need to be considered.

d) Vitamin B12 deficiency in brain shrinkage and neurodegenerative disorders

Vitamin B12 deficiency and the resulting increase in homocysteine levels can lead to brain atrophy (shrinkage). Brain atrophy usually occurs with normal aging. But this process is accelerated in the presence of neurodegenerative diseases.

Various studies have shown that cobalamin deficiency is more common in patients with Alzheimer’s disease, Parkinson’s disease, and various conditions causing dementia. But a causal relationship between vitamin B12 deficiency and these diseases remains inconclusive. However, most of the studies that relate hyperhomocysteinemia with Alzheimer’s disease and other causes of dementia report positive results. This means that elevated levels of homocysteine in the blood increase the risk of these diseases.

Controversy also exists in the reporting of studies that evaluate an association between vitamin B12 deficiency and multiple sclerosis.

e) Vitamin B12 and vascular complications

Increased levels of homocysteine in the blood is also a recognized risk factor for stroke and other vascular complications. Thus there is a possible relationship between vitamin B12 deficiency and vascular diseases.
Vitamin B12 and folate deficiencies in fetal and early life cause poor brain development and cognitive functions

Folate and vitamin B12 play very important roles in brain development, especially during the fetal and first 2 years of life. Furthermore, these vitamins are essential till puberty as myelination that starts during fetal life continues untill puberty. As mentioned above, vitamin B12 deficiency results in restricted myelination, and depending on the area of the nervous system affected, the child can present with varied cognitive and intellectual problems. Pregnant women with folate and B12 deficiency need supplements to prevent the development of these neurological complications.

Vitamin B12 thus proves to be a very important micronutrient for brain health in both the children and the elderly. There are various conditions that may lead to the deficiency of this vitamin. But if the cause is due to a dietary deficiency, the proper and timely supplementation of this ‘nervous vitamin’ can prevent damage to the nervous system. The vitamin is abundant in animal foods and healthy vegan diets are fortified with this vitamin.

A note from Ethan:

Personally, I take the the methylated form of vitamin B12 (Methylcobalamin), and I prefer Folate over folic acid… The synthetic forms of these are what’s commonly found in supplements, so read the labels.  Folate is tricky because labels will mention ‘folate’ then say ‘from folic acid’ this tells you this folate is not natural folate but rather the synthetic folic acid.