Dr. Blaylock on Fats and Oils 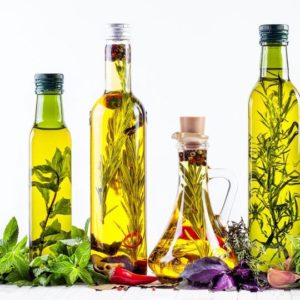 Below is a collection of information and text from Dr. Blaylock on fats shared here for education and for the purpose of promoting research.  Ethan Wise doesn’t necessarily endorse all the ideas shared below.

The Skinny on Fats
Since vegetable oils must be avoided, what is left for cooking? The best alternative is coconut oil. It is a very heat-stable oil, and it is extremely healthy — a point I mentioned in the newsletter on heart health (Heart Saver: Protect Yourself From Heart Attack and Stroke, Oct. 2004).

Coconut oil contains a special type of oil known as a medium-chain triglyceride (MCT). This substance — which in extra-virgin form contains numerous anticancer flavonoids — is processed by the body the same way it uses glucose, but without the bad effects. I would suggest eating a tablespoon of it each day, as several studies have shown that MCT oils inhibit cancer growth and prevent weight loss associated with cancer.

Extra-virgin olive oil is another interesting cancer fighter. It is what we call a monounsaturated oil, meaning it will not go rancid. You can cook with it, but I would use coconut oil instead. If you do use it, you need to add turmeric to the oil to keep it from being damaged by the heat.

A number of studies have shown that extra-virgin olive oil prevents cancer in both laboratory animals and people. People living on the island of Crete consume great quantities of the stuff, and shockingly, despite being one of the heaviest-smoking populations in Europe, they have one of the lowest lung cancer rates. The oil contains a number of cancer-inhibiting flavonoids, as well as oleic oils.

A recent study found that extra-virgin olive oil not only prevented new cancers but could also be used to fight those that had already developed. Researchers found that the principle fat in olive oil, oleic acid, inhibited a gene (Her-2/neu) known to make some breast cancers extremely aggressive. Oncologists use a drug called Herceptin to do the same thing, but it produces a significant number of complications.

They also found that the oleic acid, when combined with even a small dose of Herceptin, could dramatically suppress this aggressive gene. Extra-virgin olive oil contains more of this oil than almost any other substance.

Another special oil of interest is conjugated linoleic acid (CLA). This unique fat dramatically reduces breast and colon cancer and possibly that of the prostate. Another advantage is that it causes a loss of body fat, making it a great weight-loss tool. About 1,000 mg. a day is optimal.

Vegetable Oils: There are numerous vegetable oils used for cooking, such as corn oil, safflower oil, sunflower oil, peanut oil, canola oil and soybean oil. These oils are extracted from various vegetables. Canola oil contains a mixture of saturated and polyunsaturated fats, whereas the other oils are mostly polyunsaturated fats. These fats, called omega-6 fats, are harmful when eaten in excess. Most baked goods, breads, cakes, pastries and chips are made with these oils.

Animal Fats: These are all saturated fats, harmful because they accumulate toxins from the environment such as industrial chemicals, pesticides, herbicides and mercury.

Trans Fatty Acids and Interesterified Fats: These are artificial fats created when polyunsaturated oils are partially hydrogenated; very bad for you.

Tropical Oils: These are from tropical plants like the coconut and palm trees.

Soy Oil: This oil is from the soybean and is polyunsaturated. It is bad for your health.

Coconut Oil: This oil is saturated and does not produce atherosclerosis. Both coconut and palm oils have high concentrations of medium-chain fatty acids. Burned for energy and not stored as fats, they also enhance immunity and reduce the risk of cancer.

Olive Oil: Olive Oil is a good vegetable oil. It is graded according to how carefully the oil is extracted. Extra virgin olive oil is extracted at a lower temperature in a press. This preserves the flavonoids in the olive, making the oil much healthier. Extra virgin olive oil has been shown to significantly reduce the risk of atherosclerosis, as well as lower the risk of cancer.

Fish Oils: These oils are either extracted from fish, especially the larger cold-water, ocean fish, or from algae. Fish in fact get their omega-3 oils from eating algae. These oils are also polyunsaturated, but unlike the polyunsaturated vegetables oils (omega-6 oils), reduce atherosclerosis risk, improve immunity, improve blood flow and are essential for normal brain function.

The tropical oil market was shattered and the American public was convinced to consume polyunsaturated vegetable oils including those derived from soy, which actually promote heart attacks and strokes. Health officials, scientists and experts on oils and fats attempted to inject some truth into the barrage of media reports by showing that some of the tropical oils, such as coconut and palm kernel oil, are actually powerful inhibitors of atherosclerosis. A study of the health and dietary habits of natives living in the Pacific islands by nutrition pioneer

Dr. Weston Price shows those who ate the traditional diets rarely suffered from heart disease, strokes, diabetes, arthritis and other degenerative diseases. Their diet consisted of large amounts of saturated fat — fat from the coconut, such as coconut milk, meat and oils. They also ate a large amount of omega-3 oils from fish, as well as fruit flavonoids. Interestingly, Dr. Price found that the natives had almost perfect teeth, despite the fact that they never brushed, flossed or used mouthwash. In fact, the tooth decay rate for the islanders eating a traditional diet was substantially less than those eating a Western diet.

Despite claims that coconut oils are bad for people, recent studies show coconut oils being used in hospitals for gravely ill adult patients, as well as for infants.

Despite propaganda by the ASA, palm oil (oil from the palm plant) contains a very powerful group of antioxidant components of vitamin E, known as tocotrienols, which has been reported to protect against atherosclerosis, Alzheimer’s disease and cancer.

A recent study in the 2004 issue of the Journal of Nutrition illustrates the severity of having a high trans fatty acid level in the body.

Fat tissue from 79 participants who had had heart attacks was compared to matched controls free of the disease.

Those who had the highest trans fatty acid levels in their fat tissue had more than two times the risk of developing a heart attack than those with the lowest levels.

It is important to realize that fat does more than make your feet disappear. Fats form many of our hormones, allow our cells to communicate, make up cell membranes, compose 60 percent of the brain and enhance immunity, just to name a few of their benefits.

Studies have shown that the amount of these harmful fats in processed foods can be as high as 45 percent of the fat content.

The amount of these polyunsaturated fats in processed foods has increased 800 percent since 1982, mainly because of the propaganda published by the Center for Science in the Public Interest, which claims itself to be the watchdog for our food supply.

Fortunately, health officials and researchers are exposing the truth.

Now we know that simply changing the type of fat we consume can drastically improve our health and even help treat some deadly diseases. And we now know that these same fats can profoundly affect depression, bipolar disorder and our overall behavior and ability to think and learn.

Critics will undoubtedly counter my assertions by proclaiming that Omega-6 fats are also essential and not all bad — and that is true. They do support many essential functions in the body, but in excess, they become a major cause of disease. Americans are now consuming 50 times more Omega-6 fats than are essential for health, while their intake of healthy Omega-3 fats is terribly lacking.

I told you in the introduction that at the turn of the 20th century, the ratio of Omega-6 fats to Omega-3 fats in the typical American diet was somewhere between 2-to-1 and 1-to-1.

Today the ratio hovers between 20-to-1 and 15-to- 1, and one study even shows women having a staggering 45-to-1 ratio. Experts now know the brain works best at a 1-to-1 ratio.

At first glance, it might seem that you simply need to increase your Omega-3 intake and otherwise continue your present diet. But studies tell us that’s just not enough. Doing so will reduce the healthful benefits of Omega-3. You must eliminate as many Omega-6 fats as possible, replacing your present vegetable oil with either extra-virgin olive oil or extra-virgin coconut oil, and you should check all of the processed foods you eat, to determine which oil was used to make the product. Virtually all foods use Omega-6 oils. This is especially true of breads, cakes, pies, cookies, chips, French fries and other fried foods. Remember that Omega-3 fats are easily oxidized and must be kept in the refrigerator. Taking 800 IU of oil-soluble vitamin E in natural form will protect the oil from oxidizing and thereby enhance its effectiveness (note from Chuck: the succinate form is water-soluble and is necessary, but won’t help neutralize free radicals in oils).

Vegans are at special risk and many assume that taking flaxseed oil will protect them. Unfortunately, small children, the elderly and many with chronic illnesses cannot convert the flax oil into EPA and DHA. In that case, they can take pure DHA, which is derived from algae.