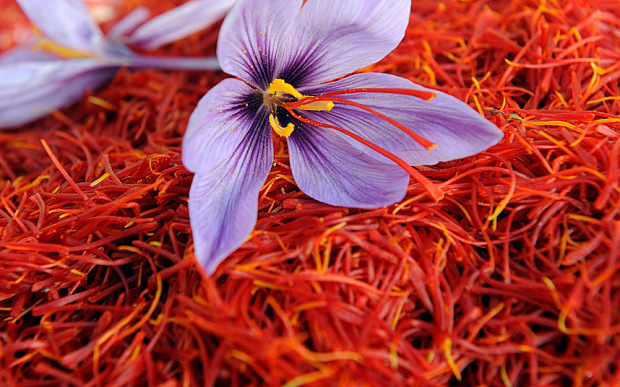 This expensive herb
is a super cancer remedy

The text below is from: http://www.cancerdefeated.com/most-expensive-food-on-earthis-a-super-cancer-remedy/

Saffron has been revered for its medicinal properties for 3,500 years. This highly prized spice appears in the works of Hippocrates, Galen and other famous clinicians of ancient times.It’s so expensive that fake or adulterated saffron is a common problem today – and likewise centuries ago, when sellers of fraudulent products were burned in the market place or buried alive.

As long as you make sure you’re buying the real deal, the health benefits are many, including fighting cancer AND Alzheimer’s disease. . .

Saffron is harvested from the dried, delicate, dark red or yellow stigmas of the crocus flower, Crocus sativus. These pollen-catching tendrils are best known as a coloring and flavoring ingredient.

Up north, crocus flowers are just about the earliest sign of spring – which is always welcome after you’ve slogged through winter. For this reason, crocuses are a special delight, and it’s nice to think they also yield a delicious food – and a powerful medicine to boot.

Many cultures around the globe use saffron in their food, although 90% of the world’s commercial production comes from just one country, Iran.

One gram of saffron (1/28th of an ounce) costs around $10 to $20. Its high price reflects the fact that it’s still cultivated and harvested by hand. It takes more than 50,000 crocus flowers — enough to spread across an entire football field — to produce a single pound of the spice.

But on the other hand, most dishes require just a tiny amount.

Saffron has many uses in traditional medical systems. These include coughs and colds, stomach problems, flatulence, uterine bleeding, insomnia, heart disease and cancer.

Studies today demonstrate that saffron’s many bioactive components help to counteract risk factors for heart disease, diabetes and stroke. It has potential as a neuroprotective and eye support agent, and may even have a role in weight loss.

Other studies have shown improved oxygenation in lung and brain tissues and protective effects in the bladder and liver against chemically induced damage.

In our brain health division, we recently learned a top expert, a Columbia professor, uses it extensively to treat people with dementia. He’s seen even advanced Alzheimer’s patients respond to medicinal saffron.

Taken as a supplement, it’s most commonly used to alleviate depression. But its greatest potential may lie in the prevention and treatment of cancer.

Over 150 different components have been identified in saffron stigmas. The most powerful of these are crocin, picrocrocin, crocetin and safranal.

Crocin and crocetin are plant pigments (carotenoids) that give saffron its deep color. Picrocrocin and safranal are oils. The first gives saffron its bitter taste and the second provides the aroma.

In laboratory studies, these compounds have demonstrated favorable effects in cancer. They can slow down and even reverse tumor growth, prevent DNA modifications that induce mutations, and help reduce the damage caused by chemotherapy drugs.

Saffron protects against most if not all factors that help cause cancer, whether these are viruses, free radicals, inflammation, radiation or toxins.

Once the cancer process begins, it reproduces or proliferates. Normal control mechanisms fail to limit its growth. In lab cell cultures, saffron suppressed proliferation and, in some human cells, even reversed it.

For instance, when saffron extract and crocin were tested on three different types of human colorectal cancer cells, proliferation was reduced down to 52%, 16.8% and 2.8% compared to untreated cells.

Significant inhibition of growth was also observed in non-small cell lung and breast cancer cells. It had no effect on, and didn’t damage, normal cells.

In culture, crocetin inhibited proliferation of highly aggressive pancreas cancer cells. In mice injected with such cells, then given crocetin by mouth after the tumor had grown, there was “significant regression in tumor growth with inhibition of proliferation.”

In another experiment, different strengths of saffron extract were injected into rats with stomach cancer. Those treated with higher doses were “completely normal” at the end of the experiment, and no rats in any of the saffron treated groups had tumors.

Beneficial effects have also been found in liver, prostate, skin and blood cancers.

Triggers apoptosis: One important method of stopping cancer growth is by inducing apoptosis or programmed cell death. Cancer cells are normally able to evade self-destruction, but powerful apoptosis properties have been demonstrated in crocin, crocetin and safranal in different cancer cell lines including stomach, lung, cervix and liver.

Impedes angiogenesis: Cancer cells are able to grow by forming new blood vessels, a process called angiogenesis. A great deal of scientific research has been dedicated to creating drugs that can block this action and thereby starve tumors from the oxygen and nutrients they need to sustain growth.

Curbs metastasis: The ability of cancer to spread to different areas of the body is what makes it so deadly. Few people actually die of cancer confined to its original site. Cancer cells are able to metastasize by dissolving collagen and connective tissues that surround them, using enzymes called matrix metalloproteinases. These are raised above normal parameters in active cancer.

Crocetin was shown to down-regulate these enzymes in breast cancer cells.

Scientists from United Arab Emirates University have published thirteen studies on saffron. One of these was on colorectal cancer in 2012, and another, published in 2016, was on liver cancer. Lead researcher Dr Amr Amin commented:

“Animals administered with crocin before getting [colorectal] cancer showed almost no sign of the disease compared with untreated animals. In those protected animals, tumor cells divided less, died more and were associated with less inflammation. All that was very encouraging.

“We then looked at the effect of crocin on human liver cancer cells and found very much the same results – cells stop dividing, tend to die more and to have much less inflammation in the presence of crocin.”

Dr. Nagi B. Kumar, professor of oncologic sciences at the University of South Florida, commenting on the most recent study, said the UAR team’s work “clearly demonstrates crocin’s anti-inflammatory, pro-apoptotic and anti-proliferative effects against liver cancer. The results of this study are encouraging and offer great promise to the field of cancer chemo-prevention.”

Chemotherapy is known to be so harmful to healthy cells that it can provoke DNA damage and induce the very thing it is designed to destroy.

In three separate studies by the same research group, mice were treated with one of three or four different chemotherapy drugs. Before they did so, the researchers gave saffron extract to the mice. This significantly reduced cellular DNA damage.

In a separate experiment to see its effect on antioxidant systems, pre-treatment with saffron extract reduced the damage caused by free radicals and increased several antioxidant and detoxification systems.

Other studies show that saffron can also enhance the effectiveness of some chemotherapy drugs and protein-based vaccines which treat certain types of tumors.

Best ways to buy and use saffron

Although research into saffron’s anti-cancer properties has been ongoing since 1990, there are no human studies, but the evidence for its protective properties is strong, in my opinion.

For cancer prevention, regular intake in supplement form is the best option. Just be aware that the amount required is not known, and long term safety issues have not been fully addressed.

Even so, toxicology studies (studies to determine if a substance is damaging) suggest it is safe to use at the recommended dose of 30 mg per day.

In cooking, while saffron is expensive, little is needed to flavor and color dishes. It’s popular in rice and seafood meals and can be added to soups, sauces and stews.

But do make sure you buy saffron from a reliable source.

Since we no long burn sellers of fake saffron, or bury them alive, you need to be on the lookout to make sure of obtaining the genuine article. The Columbia Professor I mentioned earlier recommends Optimized Saffron from the Life Extension supplement brand.

Our last issue also had good news – there may finally be more accurate tests for prostate cancer, to take the place of the PSA test. If you missed the news (including how to keep from undergoing needless surgery and biopsies), scroll down and read it now.