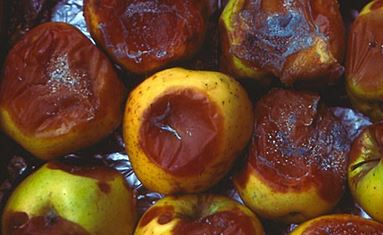 This is a section from an article titled: Michael Pollan: Don’t Eat Anything That Doesn’t Rot, Consumers are getting duped by the food industry, paying the price with their health. Amy Goodman interviewed acclaimed author and journalist Michael Pollan and this is a part of the transcript.

Pollan argues that what most Americans are consuming today is not food but “edible foodlike substances.” His previous book, The Omnivore’s Dilemma: A Natural History of Four Meals, was named one of 2006’s ten best books by the New York Times and the Washington Post. His latest book is called In Defense of Food: An Eater’s Manifesto.

Michael Pollan: Food’s under attack from two quarters. It’s under attack from the food industry, which is taking, you know, perfectly good whole foods and tricking them up into highly processed edible foodlike substances, and from nutritional science, which has over the years convinced us that we shouldn’t be paying attention to food, it’s really the nutrients that matter. And they’re trying to replace foods with antioxidants, you know, cholesterol, saturated fat, omega-3s, and that whole way of looking at food as a collection of nutrients, I think, is very destructive.

Goodman: Shouldn’t people be concerned, for example, about cholesterol?

Goodman: How is it that the food we eat now, it takes time to read the ingredients?

Goodman: You actually have to stop and spend time and perhaps put on glasses or figure out how to pronounce words you have never heard of.

Pollan: Yeah, it’s a literary scientific experience now going shopping in the supermarket, because basically the food has gotten more complex. It’s — for the food industry — see, to understand the economics of the food industry, you can’t really make money selling things like, oh, oatmeal, you know, plain rolled oats. And if you go to the store, you can buy a pound of oats, organic oats, for 79 cents. There’s no money in that, because it doesn’t have any brand identification. It’s a commodity, and the prices of commodity are constantly falling over time.

So you make money by processing it, adding value to it. So you take those oats, and you turn them into Cheerios, and then you can charge four bucks for that 79 cents — and actually even less than that, a few pennies of oats. And then after a few years, Cheerios become a commodity. You know, everyone’s ripping off your little circles. And so, you have to move to the next thing, which are like cereal bars. And now there’s cereal straws, you know, that your kids are supposed to suck milk through, and then they eat the straw. It’s made out of the cereal material. It’s extruded.

So, you see, every level of further complication gives you some intellectual property, a product no one else has, and the ability to charge a whole lot more for these very cheap raw ingredients. And as you make the food more complicated, you need all these chemicals to make it last, to make it taste good, to make — and because, you know, food really isn’t designed to last a year on the shelf in a supermarket. And so, it takes a lot of chemistry to make that happen.

Goodman: I was a whole grain baker in Maine, and I would consider the coup to be to get our whole grain organic breads in the schools of Maine for the kids, but we just couldn’t compete with Wonder Bread which could stay on the shelf — I don’t know if it was a year.

Goodman: Ours, after a few days, of course, would get moldy, because it was alive.

Pollan: Right. And, in fact, one of my tips is, don’t eat any food that’s incapable of rotting. If the food can’t rot eventually, there’s something wrong.

Goodman: What is nutritionism?

Pollan: Nutritionism is the prevailing ideology in the whole world of food. And it’s not a science. It is an ideology. And like most ideologies, it is a set of assumptions about how the world works that we’re totally unaware of. And nutritionism, there’s a few fundamental tenets to it. One is that food is a collection of nutrients, that basically the sum of — you know, food is the sum of the nutrients it contains. The other is that since the nutrient is the key unit and, as ordinary people, we can’t see or taste or feel nutrients, we need experts to help us design our foods and tell us how to eat.

Another assumption of nutritionism is that you can measure these nutrients and you know what they’re doing, that we know what cholesterol is and what it does in our body or what an antioxidant is. And that’s a dubious proposition.

And the last premise of nutritionism is that the whole point of eating is to advance your physical health and that that’s what we go to the store for, that’s what we’re buying. And that’s also a very dubious idea. If you go around the world, people eat for a great many reasons besides, you know, the medicinal reason. I mean, they eat for pleasure, they eat for community and family and identity and all these things. But we’ve put that aside with this obsession with nutrition.